I visited Tennessee this week to meet with my PhD supervisor (who is based in Cleveland even though my school is Bangor University, Wales). I had decided this visit that since I was “in the neighborhood” of the origins of the “serpent handler” churches, I’d like to visit the original site: Dolly Pond Church of God With Signs Following (you know its fun when a church name is that long).
As it happens, I also do a lecture on the origin and theology of snake handling for an undergraduate course I teach every Spring–Pentecostal Heritage. In part, I do this lecture as my final lecture of the semester in order to assure students will show up on the last day of class. I also do it because…well…its just plain fascinating to me and thus a fun way to end the course.
A Brief History of the Founder
The “founder” of snake handling churches, George Hensley, had been a moonshiner who came to the Lord at special meetings held by Homer Tomlinson just north of Cleveland, TN. Hensley took to preaching himself around Owl Hollow (eventually joining the Church of God Cleveland TN for a time) and was doing so on Mark 16:17-20, but some of his former moonshining buddies thought to scare off the meeting by tossing a box of poisonous snakes into their midst. While the congregation fled in terror, Hensley snatched up the snakes “like a boy would gather stovewood in his arms to carry into the house” (Tomlinson p. 41). This was apparently the beginning of Hensley handling serpents, but appears to have created quite a sensation throughout the region gaining the attention of A. J. Tomlinson. Of note is an invitation in 1914 by A. J. Tomlinson to Hensley to the General Assembly of the Church of God (Cleveland, TN) in order to demonstrate the handling of serpents. Hensley apparently had a difficult time in life as he was married four times and went back and forth preaching and handling snakes to making moonshine even spending time jailed for both practices (Olsen p.24). A not-so-surprising end, he died on July 24, 1955 as the result of a snake bite for which he denied medical care and was declared to have committed “suicide”.

My Surprises
I set up my visit to see the site of the Dolly Pond Church of God With Signs Following (Hensley’s church which was torn down decades ago). Church of God historian Dr. David Roebuck kindly arranged the trip north a half hour to Owl Hollow and Dolly Pond. As it turned out he had asked Bishop Wade Phillips to guide us. Bishop Phillips had just published the first volume of a series on the history of the Church of God and I was familiar with his work. This was a pleasant surprise tour guide.
We arrived at the site (where now a Church of God of Prophecy stands nearby) and saw something laying on what appeared to be the foundation of the Dolly Pond church we were looking for. It was a sloughed snake skin. A delightful find indeed. Especially as it was not a live snake. 🙂

Sloughed snake skin on the “foundation” of the location of the Dolly Pond Church of God with Signs Following.

Naturally we posed with the serpent remains. 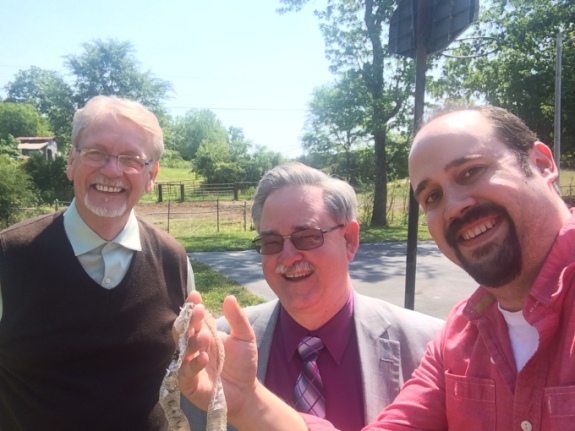 While wandering around the site, Phillips mentioned that he had been told (some 20 years prior by a nearby neighbor) that there was a small gathering of graves up on a hill near where the church had stood. We climbed the hill in search of the graves of potential members of the Dolly Pond Church of God With Signs Following and were again delighted by our find. We found a grave of one “Minnie L. Harden” (maiden name of Parker) buried near her parents Ben and Maggie Parker.

Minnie L. (Parker) Harden’s grave on the hill just up from the Dolly Pond Church of God with Signs Following 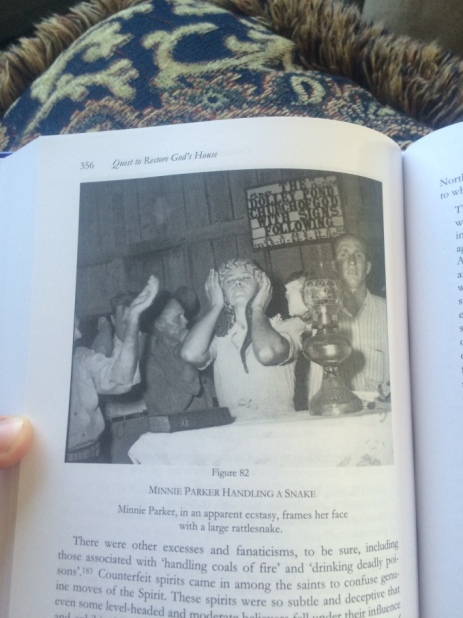 This entry was posted in History, Pentecostal, snake handling and tagged A. J. Tomlinson, Church, Church of God, history. Bookmark the permalink.