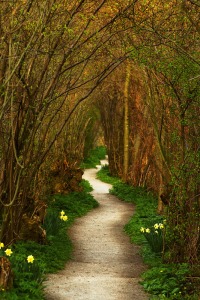 I never cease being surprised by the many places the Lord will take those who follow his calling. One could never conceive what such a journey might look like. Following Jesus is an adventure.
As a newborn I was prayed over in the Block Memorial Chapel of Trinity Bible Institute (now College and Graduate School). I had been born just a few blocks away in the old hospital in Ellendale, North Dakota. A visiting evangelist prayed blessings over me that someday I might preach Jesus to many around the world.
As a sixteen year old, I heard the voice of Jesus calling me in a church service in Omaha, Nebraska, to give my life for the ministry of sharing Jesus among Muslims. I intended to go straight upon graduation to some far off land and figure things out en-route. Instead, I heard the words of a district youth leader in the Assemblies of God of Nebraska (who went on to serve in missions full-time) addressing the need to commit to training because the cost of serving Jesus demanded that I demonstrate faithfulness to study and be discipled  into the man of God I was called to be. So I enrolled at Trinity Bible College for their Missions Major.
After Trinity I pastored several churches in rural North Dakota and Minnesota over the course of 14 years. This was the result of hearing the call of the Lord to preach followed immediately by an unquenchable passion to do just that. I had not intended to be a preacher (or a pastor).  But Jesus had other plans.
I found myself preaching for youth conferences, family and youth camps, special services, and missions conventions around the region. And I could not help but preach Jesus wherever I found an open invitation. It has led to ministry among German Lutherans and Mennonites, Swedish Baptists, Norwegian and Romanian Pentecostals, and African diaspora on three different continents. I have preached under trees, in soup kitchens, on streets, in stone churches, and private homes. I have witnessed Jesus healing and setting free. I have shared Jesus among the poor of central Mexico and on the streets of El Salvador. I have fed the hungry, clothed the naked and visited the sick. I have joined the chorus of saints gathered from across Europe and Africa worshiping Jesus in northern Italy.
I now write as one who has been training workers for the Lord of the Harvest for 4 years in two colleges, one graduate school and one seminary (between two countries). I write this as one about to preach on “prayer and action” for a series of meetings in an African church in western North Dakota. Who could have imagined such a thing?
I write this as one who sees the great harvest before me. I am moved to weeping. I am compelled to preach. I am enjoined to prayer. I hear Jesus calling…where it takes me before he comes again, I don’t know.
But I will follow! And I gaze longingly into the future before me!