Posted on September 12, 2015 by Rick Wadholm
I offer the following brief look at a facsimile of one early Greek manuscript of the New Testament which I use in my Hermeneutics course to speak to both the original manuscripts and to utilizing our translations more effectively.
The following is a facsimile of Mark chapter 1 in Codex Sinaiticus (a Greek manuscript whose original provenance is dated to the 4th century). 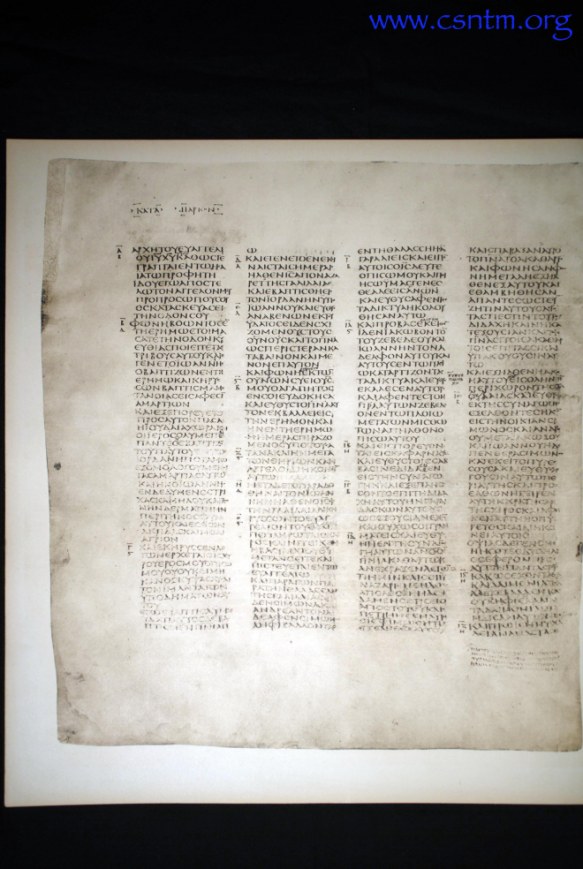 Note the following in the second line of the left-most column are the following words which I have zoomed in on below (transliterated from the Greek with translation):
IY (with a line over it) followed by XY (with a line over it). These are what are called “nomina sacra” (for more see my blog post on IHS). They are abbreviated forms of “sacred names”. In this case the name is “Jesus Christ”. The first and last letter of each of these Greek words are written with a line over them. The equivalent in English would be JS CT but with lines over each set of letters.

Then note that right over the kappa that looks like our “K” (note the further zoomed in image to the right) on that same line are more nomina sacra written very small with the following letters: YY ΘY. These are not chromosome pairs. 🙂 Again their are lines drawn just above each letter pair. These are the nomina sacra for “Son of God”.
Whoever was copying or editing for this manuscript believed that “Son of God” should be included in the beginning of Mark’s Gospel (either because they possessed a manuscript that included it, knew of one that did, or simply believed it read such), but did not want to put it into the text proper or because they were adding to what others had already copied and wanted to also include it. So instead they put it into the superscript above the text they were working with.

If you look in any contemporary English translations (like the NIV 1984 to the left) you should see a footnote for Mark 1:1 saying “son of God” does not appear in some manuscripts (or something similar to that). You have actually just looked at one of those manuscripts from your footnotes which did not originally include it even though it was later believed to be needing inclusion. 🙂