Notes on Gideon and the God of Israel: Fire and Dew, Evening and Morning 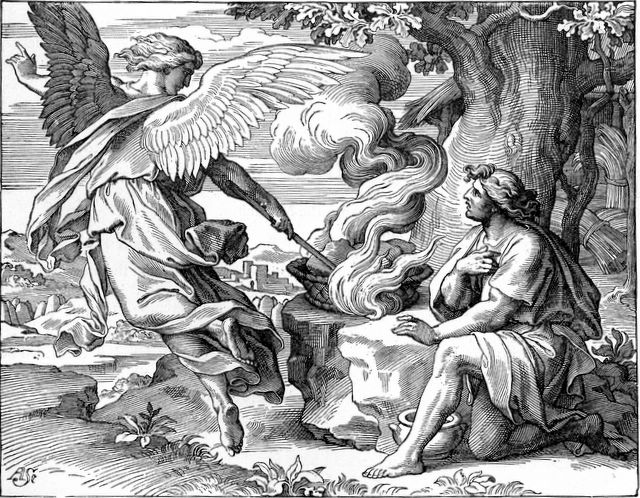 The account of Gideon requiring a sign from the God who has called him to rise up as a deliverer for Israel, has long puzzled interpreters (Judges 6.33-40). Gideon receives a messenger from Yahweh who calls him to action. This angel of Yahweh (6.11, 21; or “of God” in verse 20) is asked for a sign of confirmation by Gideon that he will indeed be successful in battle against the armies of the east and that it is indeed Yahweh (the god of Israel) that is calling him. Gideon prepares an offering of food, is commanded to put it on a rock. The angel  touches the food with his staff and fire flames from the rock consuming everything on it. The god of Israel has answered by fire for the man sent to destroy the altar of Baal and the Asherah pole.
He sets out in the cover of night to destroy the shrine to Baal and Asherah  that apparently is situated on his own father’s property. The people discover his act the following morning and intend to kill him. His father rescues him by arguing for Baal to be responsible in dealing with Gideon who thus receives the nick-name Jerubbaal (which is interpreted by Judges as “let Baal contend [with him]”). Yet Baal is silent against Gideon. 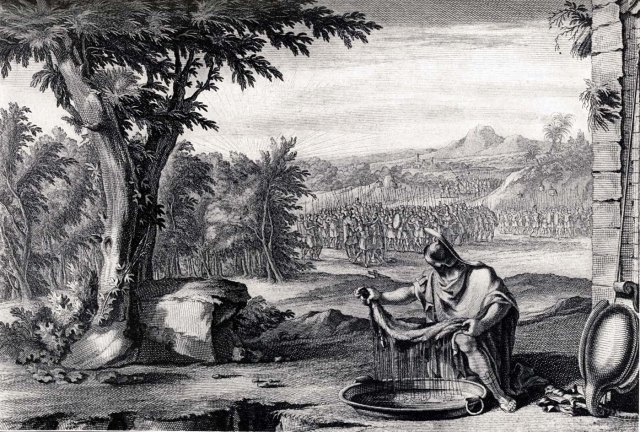 Immediately following this account, the Spirit of Yahweh clothes* Gideon and Gideon thus musters the armies of some of the northern tribes of Israel (6.34-35). Yet before he sets out to wage war, he calls upon this god to respond with a further sign of assurance. The sign is that of a wool fleece on the ground being soaked by “dew” (Heb. טָּל tal) in the morning and the ground being dry (6.36-37). The sign is granted (6.38). Then he asks for a further confirmation with the ground being wet in the morning with dew and the wool fleece being dry (6.39). The sign is granted (6.40).
The first testing of Yahweh was answered by fire. The second (and third) testing was by dew. As it turns out, both signs challenge the power of Baal as the Canaanite god who sends both fire and dew. The god of the storm (Baal Hadad) alone sends fire. Yet it is Yahweh’s emissary who answers by fire. Further, it is Baal who is so identified with the dew that in the Ugaritic literature (KTU 1.3 I.23-25) he is described as having a daughter called “Morning Dew” (tallay) which is the cognate term with the Hebrew tal in our narrative. Yet Baal is not the god who answers by controlling the dew in Judges 6.
Gideon (that is Jerubbaal) is not testing whether Yahweh can overcome Baal in battle (as if Baal were the god of his enemies, the Midianites, Amalekites and others of the east), he is testing which god has the power in the land he dwells in to act and to deliver. He is testing which god is the proper god of Israel. And it is decisively Yahweh who is god in Israel and this god alone can deliver any time of the day: evening and morning. In the morning, the citizens of Ophrah find their god Baal unable to protect his shrine. In the morning, Gideon (and the armies of Israel) find Yahweh able to control the “dew”. It was at night that Gideon destroyed the altar of Baal and build the altar of Yahweh and it was at night that Gideon shared in the destruction of the Midianite horde under the authority of Yahweh as god of Israel. Baal could not act nor could Baal rescue Israel. For the writer of Judges, Baal was the very reason for the troubling Midianites (6.1, 10). It was only in obedience to Yahweh that this community could enjoy peace in the land.
_______________________________
* “clothes” might literally be translated that the Spirit puts Gideon on as clothing if one follows the normal sense of the Qal stem for the Hebrew labash.

3 Responses to Notes on Gideon and the God of Israel: Fire and Dew, Evening and Morning